By Abbianca Makoni March 2, 2022 in Break into Tech, Main Comments Off on This Year, Search Interest For “Black In Tech” Reached A Five-Year High In The US

This Year, Search Interest For “Black In Tech” Reached A Five-Year High In The US 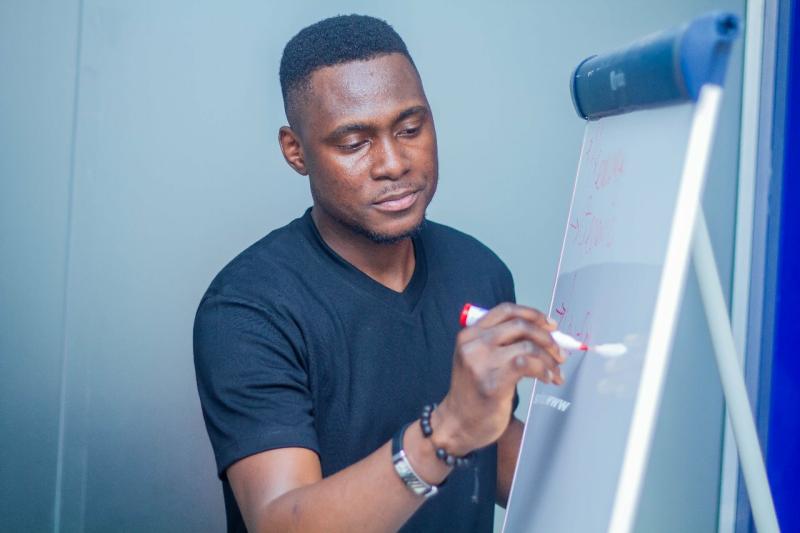 This year, search interest for “Black in tech” reached a five-year high in the US, according to Google. The demand for Black people in tech is clearly skyrocketing and POCIT is part of the flock of leading publications trying to provide you with the latest updates on the people you need to look out for.

Here’s a list of some of our favorite Black people in tech and articles you should have a read of to get some inspiration and advice.

We sat down with Ruben Harris, the man everyone is talking about, for an interview discussing everything from imposter syndrome, bootstrapping a company, making time for personal hobbies, and of course his startup, Career Karma, a company that matches career switchers to alternative education paths that might help them break into the tech industry.

Currently, three million people per month visit Ruben’s platform in search of career advice. Individuals are matched for the best job training program for them. They also have access to a community of thousands of people in live audio rooms, giving them support to complete programs and find jobs.

Founded in 2018 by Ruben and twin brothers Artur and Timur Meyster, Career Karma grew out of a podcast the trio launched two years earlier to help outsiders to break into the tech industry.

After Raising $4 Million, Emtech Plans To Expand And Work With Central Banks In The Caribbean After A Successful Ghana Pilot

Founded by Carmella Cadet, the next stage of growth comes against the backdrop of a recent $4 million seed funding from several investors.

Investors who participated in the round include Noemis Venture, Octerra Capital, Consonance Invest, XFactor ventures, 500 Global, Canaan Partners, and Andrew Lundsten (formerly of Stripe), who also serves as the startup’s advisor.

Her and the team are on a clear mission to build inclusive, safe and resilient financial infrastructures with digital currencies to unleash new markets and opportunities for everyone

My Funding Journey: POCIT’s New Series Speaking To Tech Startup Founders On The Realities Of Bootstrapping And Venture Capital

“I had a mental breakdown,” Nnenna Darlene Umelloh tells me over our zoom call. She’s a 26-year-old founder, an experienced data analyst, and an Adjunct Professor in Oakland, California.

She’s open and honest during our interview about the realities of raising capital as a woman and as a Black person.

I started this series for transparency to our readers. Many of you will be interested in building and scaling your businesses or you might simply just want to understand the experiences of others.

Through this series, we’ll be taking you through the journeys of Black, Asian and Latinx founders based in the US, UK and beyond to get the lowdown on all things money, saving, and pitching.

A total of 4.55 billion people worldwide now use social media, with 400 million new users having just come online within the last 12 months. In other words – social media apps like Instagram, Twitter, and Tiktok have an undeniable impact on today’s world, and they can either be used for good or for bad.

As we know already, the tech industry lacks serious diversity, especially when it comes to minorities, and that’s why we always take the time to celebrate those who are doing something about it.

The technology industry’s academic and professional spaces have a long reputation of exclusivity and discrimination that has led to an industry that is predominantly all white and male – but some people are working hard to change this picture.

POCIT sat down with Rose Robinson, Executive Director of Center for Minorities and People with Disabilities in IT (CMD-IT), for an in-depth conversation on the barriers facing people of color with disabilities in tech.

Robinson has more than 25 years under her belt. Her role at CMD-IT means she can use this extensive experience to lead efforts to disrupt industries, invest in building an inclusive workforce in computing and IT that elevates minorities and people with disabilities.

Inspired by her personal experience – having a sister who is blind and two nephews with muscular dystrophy – she has been able to campaign for robust change passionately.

Check it out here:

Get To Know Angelica Nwandu: From Failed GMAT Exams To The Founder Of ‘The Shade Room’

Born in Los Angeles, Nwandu grew up in a foster home after her mother was killed by her father in a tragic episode of domestic violence.  Fast forward to 2014, which by all accounts, looked like it was the year that Angelica Nwandu’s adult life was in a downward spiral. She failed her LSAT and GMAT exams because she couldn’t afford test-prep classes while all her friends were graduating.

But her life turned around years after and now she owns one of the largest media brands on social media – The Shade Room – which currently employs about 20 people.

Hate it or love it – you cannot deny the impact TSR has had on the social media landscape. While one can argue that they may be contributing to the ‘gossip’ culture TSR is clearly here to stay and even if you aren’t a fan of the brand you will be inspired by the founder’s story of resilience.

Raising capital isn’t easy. Having spoken to dozens of founders this year, I’ve realized that fundraising money – whether that’s from investors, friends, family, or the general public – seems to be the biggest hurdle for almost every business owner.

The constant headlines of Series A announcements make it seem like there’s no better time for entrepreneurs to raise venture capital, but the statistics for venture capital funding to Black founders are still quite dire.

In the UK between 2009 and 2019 just 0.24 percent of venture capital went to a team of Black entrepreneurs–a total of 38 businesses, according to Extend Ventures.

The picture isn’t all that different in the US.

But as I’ve also learned this year – it’s not impossible to raise funds as a Black founder, and the community shouldn’t give up.