By Abbianca Makoni March 2, 2022 in Break into Tech, Community, Main, Media & Entertainment Comments Off on Get To Know Angelica Nwandu: From Failed GMAT Exams To The Founder Of ‘The Shade Room’

Get To Know Angelica Nwandu: From Failed GMAT Exams To The Founder Of ‘The Shade Room’ 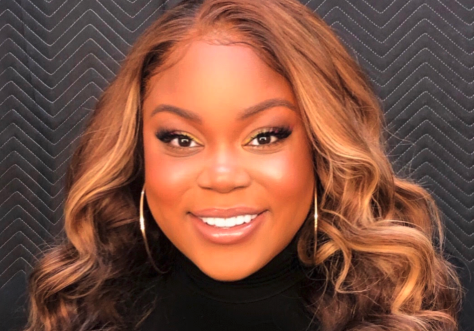 Born in Los Angeles, Nwandu grew up in a foster home after her mother was killed by her father in a tragic episode of domestic violence.  Fast forward to 2014, which by all accounts, looked like it was the year that Angelica Nwandu’s adult life was in a downward spiral. She failed her LSAT and GMAT exams because she couldn’t afford test-prep classes while all her friends were graduating.

But her life turned around years after and now she owns one of the largest media brands on social media – The Shade Room – which currently employs about 20 people.

Hate it or love it – you cannot deny the impact TSR has had on the social media landscape. While one can argue that they may be contributing to the ‘gossip’ culture TSR is clearly here to stay and even if you aren’t a fan of the brand you will be inspired by the founder’s story of resilience.

In an interview with Ebony last year she opened up about the difficult journey and said: “My life looked like it was going downhill.” She was referencing her failed exams. The Los Angeles native had also just walked away from steady work at an accounting firm after her manager gave her an ultimatum.

“He said you can focus on what’s going on here or you can quit,” she recalled. “I chose my dreams.” The dream was screenwriting, a passion she had set her sights on since childhood. She wrote had written a script that earned her a spot at a Sundance screenwriter’s lab and a $5,000 grant.

But the money was reportedly quickly devoured by living expenses, leaving Nwandu searching for her next move as it was unlikely that her screenwriting ambitions would yield income anytime soon.

After she recognized the internet as a viable source of income, she tried to launch an online boutique, JuJu’s Closet, but was not met with success – she eventually launched The Shade Room. Nwandu secured The Shade Room (TSR) handles on various social platforms and began churning out celebrity-driven headlines

She was inspired by the likes of Bossip and The YBF. Speaking on her journey with Afro Tech, she admits that it took time to properly understand what kind of brand she wanted for TSR.

“When I first started TSR, it was just a salacious platform where I was sharing my opinion on everything that was going on. It was very edgy and funny, and over time, not only was I not satisfied, but the roommates were no longer satisfied with that kind of content,” she said, adding, “It was at that point that I was like, ‘I need a vision.’ I felt like I had built up a community of people. So, I asked God to give me the vision to transform TSR into something more important and better. The vision that I got was basically that TSR would become an information hub and be more important than just Black culture, but would go further into the news.”

Within a few days of launching, The Shade Room’s Instagram account accrued 3,500 followers. After a week and a half, 10,000 followers. Then came an assist from former Basketball Wives star Tami Roman, who featured the account in her Instagram stories. After eight months, The Shade Room began to generate revenue and the budding entrepreneur witnessed her brainchild evolve into a full-fledged business.

But with success comes many challenges.

By 2016, The Shade Room had amassed over 500,000 followers but the account had also been deleted from Instagram at least twice. After a period of depression, Nwandu decided to follow the advice of her sister to use the negative publicity as a launchpad to start over, according to Ebony.

This, however, didn’t stop the struggles.

Photographer and copyright attorney Richard Leibowitz began serving her with one lawsuit per month stemming from improper use of images, according to Nwandu. This pushed her to learn more about copyright law.

The Sky Is The Limit

Nwandu wants to evolve the site from its gossip-mongering rep. She tries to balance it out with more positive-affirmation headlines and verticals—such as Daddy Duties, which showcases Black fatherhood—and TSR Positive Images.

The brand has also been dabbling in original video content creation in partnership with Facebook Watch, producing properties like “The Shady Brunch,” a cooking competition, and plus-sized modeling competition, “Thick House.”

She has also hitched TSR to philanthropic efforts, including a scholarship fund for first-generation African-American college students and funneling profits back into the community in the form of direct payments, rent assistance, and grocery vouchers