Interview: Meet The Black Gen-Z Duo That Just Raised An $18M Series A Investment Round For Their Fintech 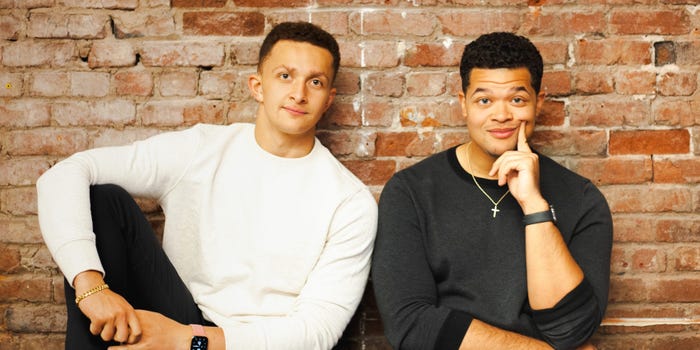 A few days ago, I got an email regarding a Black-led, Gen Z fintech startup providing income-constrained individuals with investment opportunities.

The release said the company, run by a 22-year-old and 25-year-old duo, had just announced their Series A investment round.

This – of course – immediately caught my attention because I’m eager to highlight the achievements of young people in tech, but I was even more ecstatic when I saw the figure – Sheridan Clayborne and Mitchell Jones had managed to raise a whopping $18million in their fundraising round.

That’s a pretty big deal but their journey into the tech scene started long before they launched Lendtable last year.

Clayborne, 22, had already founded a $20 million (revenue) eCommerce startup before he met Mitchell Jones, 25, the former CEO of Parable. Both men have years of experience working at major tech and finance giants and are now using their respective skills to shake up the industry.

The company they now run together, Lendtable, caters to people who are too financially stretched to maximize their employer’s 401K match and lets them borrow money to maximize the match, boosting their long-term retirement savings.

1 in 4 Americans don’t get their entire 401(k) match. That means 25 million workers are leaving $24 billion on the table in free employer contributions.

The primary reason these workers cannot get their match is, according to Ycombinator, that they don’t have enough to cover living expenses investment.

So the tool the Gen-Z team created has come in handy for dozens of families across the US.

POCIT sat down with the two founders to talk about their journey to the top and their plans to take over the industry!

P: If you could describe yourself in three words – what would you say?

P: What exactly inspired you to get into tech?

I didn’t really have a bunch of money to save. So I got an education, and I went to Yale. And as soon as I got there, I was like, right now, I got to work on step two. Step two was to save my money.

[I soon came to realize after I landed my first job that] my parents had been saving for over 20 years all in checking accounts, and what that meant is they were not going to be able to actually retire. And to me, that really, really, really ticked me off.

I thought, how can people all over the United States be doing the right thing, which is putting away money, but because they aren’t doing it the right way – they’re getting squeezed. And hat lit a fire under me to say, this system is broken and I wanted to figure out how to fix it.

Clayborne: I think my inclination towards tech was pretty simple because growing up, I was kind of broke as a kid, and it was one of the best ways to make money.

P: Sheridan, I know you were the youngest person to get into Northwestern at age 15, where you were a Computer Science and Econ Major, and then you went onto work at JP Morgan, Dropbox, and others – would you say the skills you gained from working at such reputable companies at a young age has helped you with your own company?

Clayborne: I guess I just got very used to being around much older folks when I was younger. I was 15, hanging around those aged 17 to 18. I think a big lesson I had from it is it almost kind of demystified a lot of views other people may have had that I heard about.

I just spent a bunch of time around these folks and realized they’re no different from you and me at the end of the day. And I realized everyone’s the same person; if someone else can do something amazing and big, then so can I.

P: Mitchell – I know your experience includes Parable, Facebook,  Dropbox in cybersecurity, and I’m wondering how working for such big tech firms opened your eyes to the potential you had?

Jones: I learned a number of things while working there, including what I needed to know to be successful as a founder. So Dropbox and Facebook both taught me very unique lessons.

At Dropbox, I was a product manager doing cybersecurity, and I learned what it meant to work in a workplace and what good work culture looks like, what caring about your teammates looks like, and so forth.

At Facebook, I was running a team, I was a FinTech as a product Manager running a digital wallet for all of Ladd, Tam, and all of AIPAC, and as you know, we launched that to millions of people. There I learned how to lead, how to get things done, and how to influence people when you have way more people than you can talk to in a day.

So I’m really appreciative of that time. It’s kind of like in sports, right? Before you can win games, you got to learn how to assist first, right? You got to work on your craft.

The second thing, which is really important, and this is the thing that’s really important to my story is I needed money. Those jobs helped me get to where I was going to be, I didn’t have a benefactor or a parent who could fund that for me.

P: Okay, and so when it comes to the idea of Lendable – how did this come about, and how did you both know that you were the right people to do the job?

Clayborne: It just came from the initial confusion of just setting up a 401k. If you’ve set up a 401k at a company before you’ll know it’s super cumbersome and super annoying. We were just talking about it with some of our friends, a bunch of them were kind of complaining about they didn’t like the signup flow and the process.

But the biggest thing we kind of kept hearing is that there’s a lot of people who just weren’t doing it at all and that was mainly because they had a lot of other commitments and couldn’t afford to. They were actually in a position where they could not afford to take advantage of the opportunities some companies had with their 401K. For example at DropBox back then if you put $6K down they would actually match you and put another $6K.

And that’s what kind of sparked this idea.

P: What were some of the challenges you experienced while building Lendtable?

Clayborne: User Education was the first big one especially when we’re initially building the company, a lot of people just had questions because the idea of debt is something that for a very long time has always been a bad thing. So this concept of using debt to actually build wealth isn’t something that a lot of people have kind of done before. But what you realize is that it’s actually a really useful vehicle.

Jones: I think the other point was that we were building the company at a time of a lot of uncertainty, right?

We founded the company in March of 2020, it was the heart of the pandemic and we didn’t know if 1401ks were going to be removed in large because we didn’t know if some companies were coming back, we didn’t know if we were gonna be able to raise money. There were just so many things that we had to figure out and the thing that kept us going was that we believed in each other and when we looked at what we were building we knew it was the right thing.

P: Where do you hope to be in the next five years?

P: Getting investment isn’t easy – now, if we’re honest, getting investment is incredibly hard, but you’ve managed to do it. What are the top five things you’d advise a startup founder that’s keen on sending off their pitch deck soon?

Don’t code email try to get warm introductions Go to networking events, find friends who can introduce you, ask people if there are people they know that you should follow on socials.

I think the key switch you have to have when fundraising is and it seems very convoluted or backward but your job is not to prove to someone in the early stages and pre-seed why you’re worth it.

Your job is to find someone who wants to invest in you, despite all of the flaws your company may or may not have.

On your second question, which is equity raising versus bootstrapping.

Some of this is an ‘it depends situation’ and it depends on a few things: Bootstrapping is phenomenal – if you can afford to do it yourself and if you’re in an industry where you can kind of make money from an MVP.

So if you’re making a SaaS business, you can consider bootstrapping.

In our industry, it would be very difficult because in order to make money, we have to give out money.

So it just requires money to do the business.

I think the third and final thing that matters is how quickly are you trying to grow the business? It’s true that some bootstrap businesses can grow just as fast as equity businesses. But the whole point of raising fundraising rounds is to move fast is to build quickly. It’s to get massive scale in a very small amount of time. And it is very difficult to do that without Having a lot of capital.