As a Black designer working in predominately white spaces, I have to think about how I show up in my professional environment. I make sure my tone is friendly. Non-threatening. I edit my speech so that others won’t doubt my intelligence. I am mindful of my brightly colored locs and try to dress in a way that signals I am a professional. I didn’t realize it for a long time, but I designed a different version of my Blackness: a created version to fit into white society.

To some extent, all designers in corporate settings have to assimilate. Each of our unique, creative talents has to fit conventions determined by our teams, organisations, and industry contexts. Designers have to advocate for their value within a team that may not fully understand or acknowledge their skills. This experience occurs two-fold for a Black designer. A Black designer also has to advocate for their value as a professional person who is worthy of respect and being a creative whose craft is worthy of consideration. Because Black designers exist at the intersection of these identities, they do their best to cope with both experiences at once. Things can feel overwhelming very fast, but that shouldn’t be the case. Black designers should fully embrace their authentic identity without question, inside and outside of work.

The struggle for authenticity began, for me, at a very young age. Growing up, I was exposed to mass culture as most of us were — through design. The clever ad campaigns, cutting edge visuals, and aesthetic storytelling that bombarded media channels during the 90s helped form my perception of the world around me. The messages shaped my mind so quickly, but another kind of formation was subtly occurring beneath the surface. I was being taught that those visually arresting ads, and more specifically the community of designers who created them, didn’t consider me a part of their audience. I’d seldom see Black children in toy ads. And if I did, they were tokens clearly meant to check off a box. At the time, I didn’t realize its impact on me, but I was very aware of the omission. Aware that my identity had been omitted from something considered mainstream in the United States. As a Black person growing up in the rural U.S., I wondered when the design profession decided people like me didn’t have a place in its very intentional world.

As the 90s progressed, I had to understand and accept that — as a Black American — I was not “mainstream.” For anything remotely related to the Black experience, I would have to go looking for it. In the early to mid-90s, when the dial-up web itself was considered a luxury, jumping online wasn’t always an option. As a kid, Blackness did exist in culture, but mostly in segregated spaces. I was fortunate to grow up during what some refer to as a renaissance of the Black television sitcom. Fox was airing Martin and Living Single, ABC had Family Matters, and The Fresh Prince of Bel-Air was all I knew of NBC. Newcomers like WB and UPN had a slew of Black television shows, but most of them went as quickly as they came. Oftentimes, low ratings and cancellations closely followed their proliferation. It seemed these networks were trying to package a unified Black experience. The problem was that experience didn’t always resonate with diverse audiences — including diverse Black audiences.

I was, however, incredibly inspired by the aesthetics of these shows. Visuals were vibrant and colorful. Loud hues danced across the screen. I was often struck by the vivid contrast of these colors against Black skin. We stood out in this world. We could be beautifully represented. We could have a strong voice. Why were we only permitted to do so in “Black only” spaces? Where were the iconic Black characters on a show like Friends (which ironically took place in a melting pot like New York City)? Where was the vibrant color and contrast that I found beautiful and made the world feel so alive?

Bold colors and patterns are more than a simple aesthetic decision in many Black communities. Bright colors, patterns, and motifs in African art and fashion hold meaning. Certain colors represent specific aspects of life (like green’s association with prosperity and red symbolizing some tension). These design choices represent black African values and experiences. African Americans, who have been severed from their stolen African roots, can choose to revive these visual meanings in day-to-day lives in the United States. The Fresh Prince of Bel-Air displayed Will Smith adorned in Black streetwear brands like Cross Colours that reflect this African influence. Like many other Black designers who grew up in that era, I was influenced by this artistic style. But as a Black man working in tech, I quickly learned that my appreciation for this Black aesthetic history was not shared by everyone else in the field.

I remember interviewing for a design role at a large, well-known tech company here in the Bay Area. The company has a reputation for beautiful design and equally amazing products. It was a dream opportunity for me. I was so excited that they had found my portfolio and reached out to me to be a candidate.

After ten rounds of interviews and positive feedback, I finally presented my designs to the last two interviewers. One of them was very much intrigued and supportive of my work, while the other told me, “ your designs are so loud. I worry that you would get bored working here.” I didn’t quite know how to respond. My mind was swirling with so many thoughts, but one reason kept surfacing in my mind as to what their language actually meant. “Too loud” felt like coded language for too Black.

I should have known better, but this feedback did affect me. I started assessing my designs with a new kind of scrutiny. I began to dial down my “loud” creations to be more “professional” based on that interviewer’s words. It didn’t feel right, but I tried to do it anyway. While experiencing that sort of feedback in an interview was new, coping with both conscious and unconscious racial bias in the workplace was not. Luckily, I’d been prepared for those types of interactions early on during my years in undergrad.

Even though I was one of the only Black people in my undergraduate design program, I connected with a mentor who took me under her wing. Sheila had been a student at the University of Louisville and became an employee in the technology department. As a Black woman creative, she impressed me with her success. I had never seen that before. You see, Sheila had a lot of experience navigating professional spaces with a majority of white employees. She gave me a straightforward and honest account of what would be expected of me as a Black professional. Don’t give any white person around me a reason to suspect I wasn’t focused on my job and producing good work. She knew behind the smiles and nods that oftentimes, there could be ill intent, baseless fear, or hostile behavior towards a Black professional. I’m not sure how, or even if I can ever repay her for the role she played in my life, but I’m forever thankful.

Experiencing this kindness and compassion inspired me to try and do the same for others. Uplifting other designers, especially designers of color, has become a big focus for me. I realized that to be the best asset to others; I first have to appreciate myself and my work fully. I need to understand and recognize my own value as a creative and how my experience as a Black man shapes my aesthetic perspective. I’ve gained so much support along this journey from relationships in and out of work that honor and encourage my authenticity. As I continue navigating this industry, learning to embrace my own identity at work, I now realize I need to help others find their courage. I’ve started to pursue this in several ways:

I’m so thankful that lots of younger Black creatives are creating change in these spaces each day. They are building a community amongst themselves and supporting one another in ways that I couldn’t have previously imagined. It is the responsibility of companies to create environments that provide more psychological safety for underrepresented employees. We come to work every day despite the challenges that await us and work so hard to produce innovative designs. To any Black designer or creative out there who may still be questioning themselves, it’s time we unapologetically claim what I now know to be our superpower. Our true Black identity.

This article was originally published on Medium for Salesforce Design. 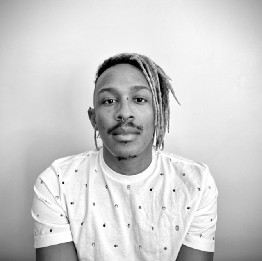