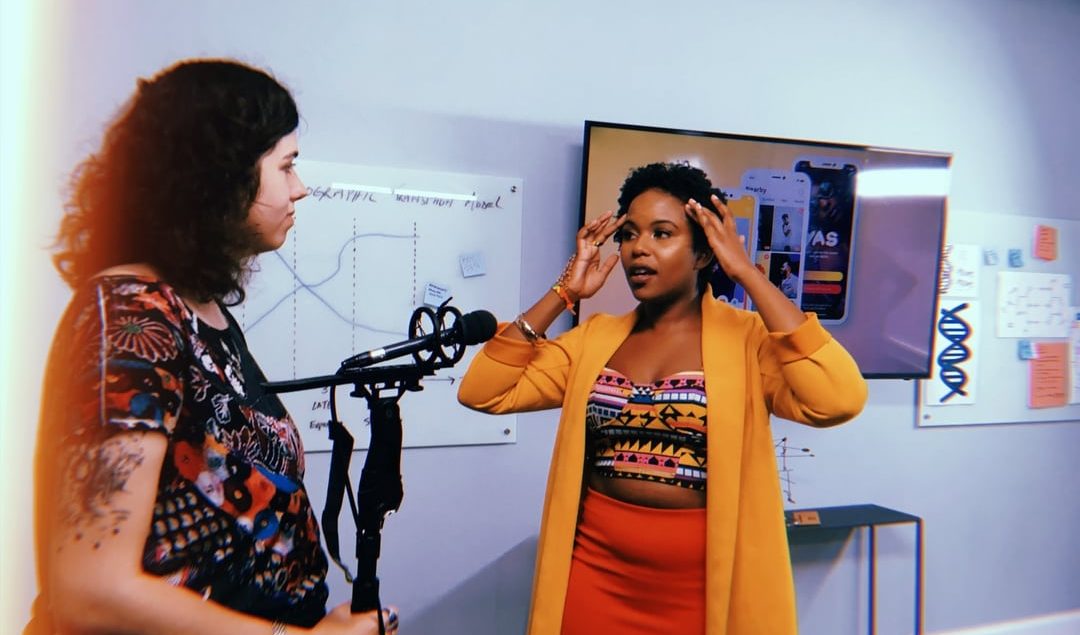 Aya’s story needs to be on peoples’ screens not only to bring light issues around bias, but to add more black women’s faces in spaces where they are underrepresented–the tech/startup worlds and on mainstream media/entertainment platforms. pic.twitter.com/0Eltn4RvE6

What is Tech Bae about?

Tech Bae is a series that follows 28-year-old Ayanda or Aya for short; a South African alien living in New York City. After the sudden dissolution of a long-term relationship, she realizes that she has to start dating again; it’s 2018, and for a millennial like herself, that means engaging in dating app culture, something she’d never had to do before. Yes, that was one hell of a long-term relationship. Looking her 30s square in the face and not wanting to have all of them squandered on one dude, she jumps in head first, only to find out that dating apps suck for her. And not every day for her but, women who look like her, black women.

Aya has got a lot to prove, her family’s invested tonnes of money in getting her an American education, and for all intents and purposes, she feels like she’s failing them. Aya sees her dating woes as an opportunity to do something. With the help of her best friend Que, a competent coder, she develops the YAS Gurl dating app, with the intention to shield black women from the fetishization, racism, and ostracization they encounter on mainstream dating apps on a daily basis.

Tech is the last place Aya expects to find herself and career, but she goes with it. She is confronted, however, with the glaring absence of women, let alone women of color in tech, and for some a time, it looks like she’ll never win. So we follow her journey as she goes on test dates and navigates the war zone of fundraising in the skin that she’s in.

Who is Tech Bae for and why does the story matter?

Tech Bae is for everyone. But it’s for black girls first. Black women are a marginalized group whose needs, considerations, preferences, and opinions in society have historically been last. This is for the black woman who, like everyone else, uses tech everyday but is unaware that it is available for her as a career, a means solve problems that are important to her and her community; as a means to change the world around her. But Tech Bae is also for everyone in the sense that we’ve all had relationships, and because the story centers around a dating app, links are at the heart of it. Which is something we can all wrap our heads around.

How do Aya’s experiences link to your life?

I’ll say this first so that it’s out of the way. I have never been on a dating app. That being said, because of my education from elementary school to the University of Cape Town in South Africa and NYU, I have moved in predominantly white spaces, and know, viscerally, what it feels like to be the least desired; which is exactly what dating app data reveals.

“82% of non-black men have some bias against black women” [Christian Rudder in his book Dataclysm: Love, Sex, Race, and Identity–What Our Online Lives Tell Us about Our Offline Selves]

I recently pinned this thread to my Twitter profile, in which I go into detail about how I liked this white boy in primary school and told me he couldn’t be my boyfriend because I was black. That marked the beginning of a lifetime of me feeling unwanted.

What is happening with diversity and inclusion in the entertainment industry? What steps are being taken to improve representation?

I think people just realized that homogeneity is dull and uninspiring. It doesn’t solve any problems and breeds apathy…look at the prez of the USA. The entertainment gatekeepers had long been spreading this lie that leads of color, and stories centered around people of color, were n’t a thing because they wouldn’t generate the revenue white faces, and white stories and white Hollywood did. I’m so grateful for people like Ryan Coogler, Shonda Rhimes, Barry Jenkins, Issa Rae, Kevin Kwan, Jordan Peele and Ava DuVernay who told their stories anyway and proved this theory wrong!

Regarding the steps taken. I feel like the industry doesn’t really know which steps to take because diverse writers of clout are not coming out of the systems that have been put in place for young writers to succeed. They are out there creating their web series, they are novelists and stand up comedians…lord knows they aren’t in the writers’ rooms. The industry claims to be hungry for diversity like it hasn’t always been there! So how do you go about finding something that has been staring at you in the face? Apparently, you don’t know what to do with it or how to appreciate it and take advantage of it entirely.

I say, give diverse writers the support they need to tell nuanced stories, and don’t be afraid of their nuance either, that’s what makes the stories juicy, and engaging and new.

Why did you decide to crowdfund? Why choose iFund Women to as your platform to do so?

We are crowdfunding Season 1 of Tech Bae because we like to take things into our own hands. When Tech Bae was conceptualized, I utilized the people, resources and means I had at my disposal to film a teaser which would serve as a proof of concept. Karoline K Anderson executive produced it, my husband, Atandwa Kani (Young King T’Chaka in Black Panther) directed and acted in it, I used a bunch of NYU Grad Actors (the program I had just graduated from) and Katelyn Manley (creative producer) helped pull in favors from the film community in NYC.

What I didn’t realize at the time was that we were at the very grassroots level of audience building. That is also the idea behind crowdfunding. We are bringing our early believers on this journey with us, and are accountable to them to make it happen. We thought iFundWomen was a fantastic platform because it’s a safe space for us to be asking for help to tell this story, it’s not exclusively film focused and thus we attract support from people with different kinds of interests, and we get to keep everything that we raise whether we hit our target or not (but we are hitting our target, just saying.)

Where will people be able to watch Tech Bae? What are your plans for the future of the show?

The Tech Bae teaser is available to be consumed freely and at will on YouTube (let’s get those views up people!) and we will premiere Tech Bae Season 1 next summer, July 2019. The goal is to then build up enough excitement and buzz around the show that we can eventually pitch it to larger platforms such as network or cable television and streaming, i.e., Netflix, HBO, Amazon, etc.

As mentioned we are crowdfunding at ifundwomen.com/projects/techbae. We also have our first ever fundraising event. We are selling tickets for $25, which give you access to the party at the OkayAfrica Space in Brooklyn on December 5th from 6:30 pm to 9:30 pm. There’ll be bites, drinks, and Afrobeats. We managed to hustle a few prize sponsors too! Join Us! and follow us on our socials @TechBaeOfficial