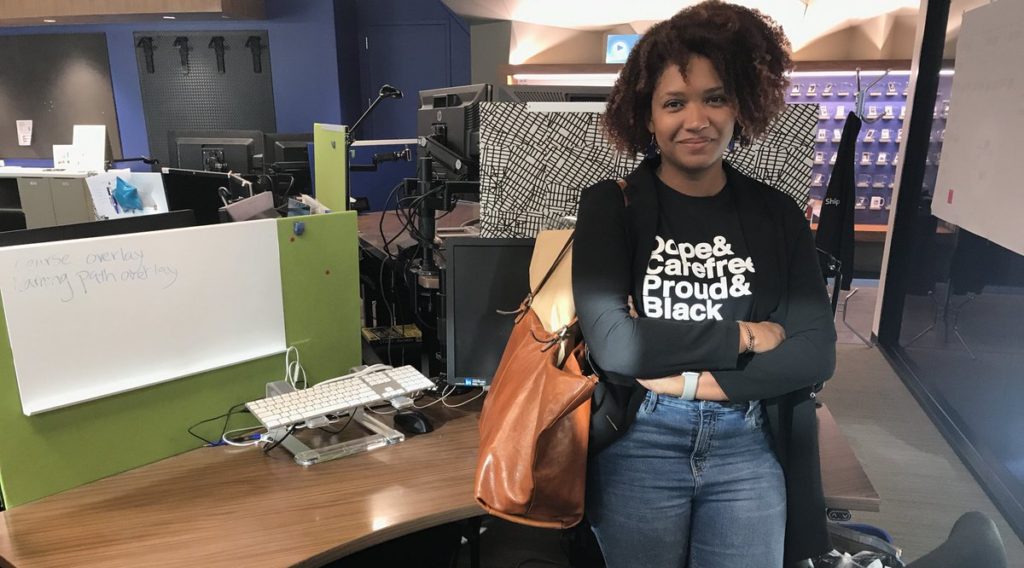 When did you know that you wanted to work in tech?

I first started to consider a career in tech during high school, when I took a robotics class. I remember loving that I could see the physical result of my program. My robotics teacher was one of those teachers that encouraged me to be confident and chose me, alongside two other students, to represent our school at a competition that was being held at Georgia Tech.

The next year, I took AP Computer Science, and while I loved the content, I had a hard time with some of the guys in the class. I almost decided against computer science as a major in college based on that experience.

“My robotics teacher was one of those teachers that encouraged me to be confident.”

Who is a role model that you look up to?

I had a huge fascination with Ada Lovelace when I was younger, not only because she was the first computer programmer and a badass in her own right, but because she was one of the few women we learned about in a math or science class.

Where is your hometown?

I was born in Kingston, Jamaica, but I kind of have multiple hometowns. I moved to the suburbs of Atlanta, Georgia when I was ten years old and went to middle school and high school there. Then, to the surprise of a lot of my friends and family, I moved back to Jamaica and went to college there. After that, I moved to Urbana-Champaign, Illinois for graduate school. Moving has been a constant theme in my life.

What is a struggle that you’ve faced and how did you handle it?

I had some challenges getting the schools that I attended in Georgia to let me into the more advanced classes, but those were, for the most part, external struggles. I didn’t have massive struggles with school until I started pursuing my Ph.D. I ended up dropping out of the Ph.D. program in my third year. That experience is one that I’m still processing — learning how to move past failure and learn from the experience is probably the most important lesson that I could have learned in my twenties.

“I ended up dropping out of the PhD program in my third year. That experience is one that I’m still processing.”

What is something that you are immensely proud of?

It’s related to my Ph.D. as well. I’m proud that I figured out how to move on and grow from my failure. That moment when I realized that this was the path I needed to go down for myself, I felt like I’d hit rock bottom. I was crashing on my friend’s sofa, and then I lost two friends in the following months to suicide and cancer.

Now, I look at my life in 2018, and there’s no way that I would have accomplished the things I have, made the friends that I have, and been able to help my family along the way if I’d stayed in the Ph.D. program. It’s a good reminder that it’s okay if I fail — I’ve failed before, survived, and thrived.

What’s something that’s been on your mind a lot lately?

I think a lot about how we treat junior developers in this industry — both in terms of letting them in, and how we treat them once they’re here.

Oxtail with rice (Jamaican style), or anything Italian, or anything chocolate (as long as there’s no coconut). Yes, I like my food.

This is like Sophie’s Choice. How about my top three? Harry Potter (yes the whole series, so I’m kind of cheating), Pride & Prejudice, and Year of Yes.

If you could try another job for a day, what would it be?

Something that has some hardcore physics, like working at CERN or NASA. Physics feels to me like that love that got away. Perhaps that’ll be my next career!

If you could give your 18-year-old self a piece of advice, what would it be?

Don’t worry about being labeled bossy. Stand up for yourself in all aspects of your life.

I'm Founder Of An African Travel Startup... & Here's Why I Didn’t Post About The Ethiopian Airlines Crash

How Coding Helped This Nigerian Immigrant Find A Modicum Of Control In A Hectic World!