By Kumba Kpakima June 22, 2022 in Break into Tech, Career Growth, Main Comments Off on TikToker Flooded With Support After Posting Video About Being The Only Black Woman At A Tech Conference 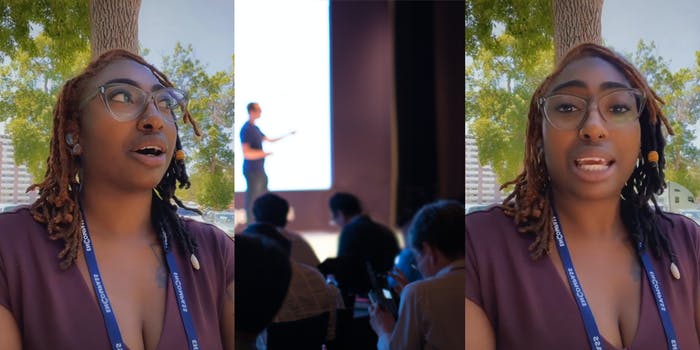 TikTok user Natasha (@tashathecaptain) worked as a tech lead at a drink distribution company. She helped create new systems to help support drivers who may have experienced technical issues traveling across the country.

After three years, she decided to resign after feeling overworked, underpaid, and a lack of recognition for some of the new initiatives she had implemented and created to help build the company.

After attending her first-ever tech conference in Colorado, Natasha was taken aback by the lack of diversity. After realizing she was the only Black woman in attendance, she took to the social platform to share her thoughts on the lack of Black women working in tech.

“Less than one percent of the people here are Black, and I think I’m the only Black girl in this entire place,” she said in her video.

The lack of diversity at the tech conference provoked negative mental and professional feelings for Natasha.

“I feel intimidated, I feel stressed, I feel anxiety. I’ve tried to speak to some of the people here, and I don’t think they care to listen,” she explains. “But when my manager speaks to them – he’s a white man – they’re engaged and talking, and I would be saying the same thing.”

Even though the percentage of women working across all job sectors has grown, the five most prominent tech companies still only have a workforce of about 34.4%, according to Built In.

Reports also show that Black women hold only 3% of “computer-related” jobs and are promoted less often than white women. This is primarily due to “studies which have shown that managers are quicker to forget the achievements of Black women than they are to forget those of white men or women,” according to Built In.

In practice, Black women are opting to leave the industry faster due to feeling disrespected, alone, and a lack of motivation to continue in the field.

Users reunited in the comments to show their support and commend her for staying true to herself despite the circumstances.

“You came as one but stand as 10,000. You got this! You’re there because you deserve to be there. In this moment, choose to be proud and not fearful,” one user wrote.

“Keep going! Remember you deserve to take up space. You belong in the room! You are competent and capable! You can do this,” another added.

Towards the end of the event, it seemed as though things started to lighten up as Natasha later posted a video of herself enjoying drinks and music, “Thank you for all the support. Confidence is growing,” she captioned the video.

Natasha has gone on to use her TikTok account to share her journey and uses her past knowledge and experience to help other Black women who are keen to break into the industry.