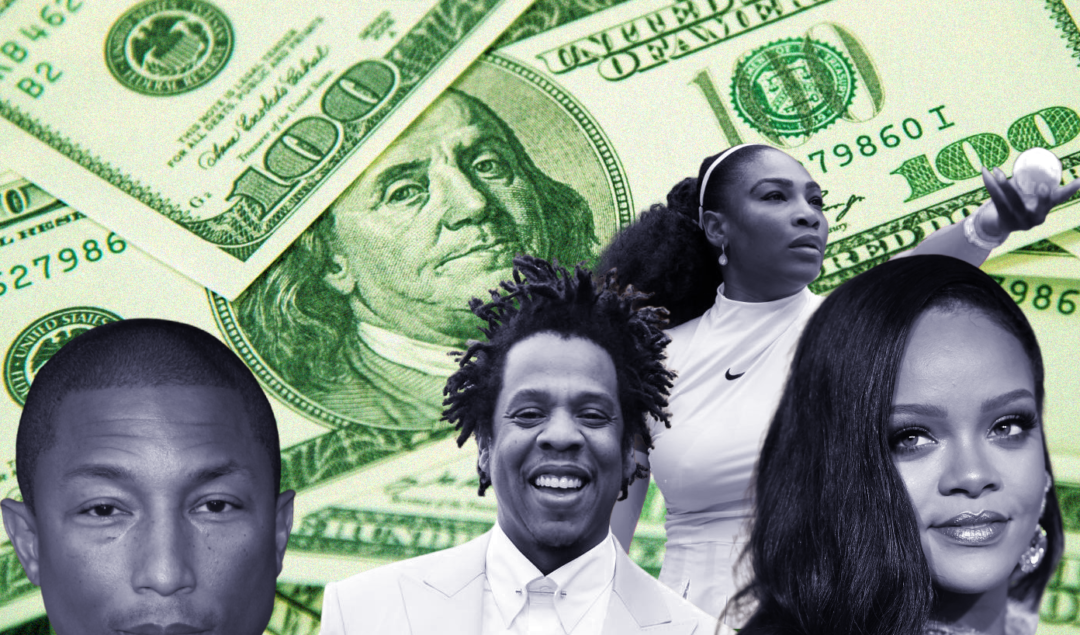 The number of Black-owned businesses has risen dramatically. Research shows, since 2007, the number of firms owned by African-American women has grown by 164%. Yet despite the knowledge, innovation, and let’s face it – the hustle, minority entrepreneurs, are being shut out when it comes to access to capital. However, many Black and Brown celebrities are growing their investment portfolios and flexing their VC muscle. Not only are they investing in startups and hooking up founders with serious capital, but they are also using their platform and wealth to empower minority-led businesses and advocate for a more equitable playing field.

According to nonprofit group BLCK VC, just 1% of venture capital founders and only 3% of fund investors are Black. White VC founders represent north of 80% of people who receive funding, while African Americans represent less than 1%. To level the playing field for entrepreneurs of color, celebrities have recognized this disparity and are doing something about it.

Keisha Knight Pulliam actress has teamed up with Arian Simone to launch the Fearless Fund to invest $5 Million in Black women-owned businesses. Their mission: to bridge the gap in venture capital funding for women of color founders building scalable, growth aggressive companies.

The pair have established $5 Million in pre-seed, seed and Series A startups. To date, the fund has six portfolio companies with plans to invests in over 20 companies. They are investing in companies with innovative Black entrepreneurs who are founding companies, including, Hairbrella and AmP Beauty LA. Hairbrella (founder: Tracey Pickett) has reinvented the rain hat to keep hair dry, and styles protected no matter the weather. AMP Beauty LA (founders: Montre Moore, Phylicia Phillips & Angel Lenise) is an online retailer that uses AI, machine learning, and data science to service the beauty needs for women of color, who are often ignored by beauty retailers.

Pharrell Wiliams, the music mogul, entrepreneur, and activist has launched an accelerator for Black and LatinX entrepreneurs. Black Ambition is on a mission to bridge the racial wealth and equity gap with initiatives that award grand prizes ranging from $1 million to a $250,000 HBCU prize. Black Ambition has raised an undisclosed amount of funds from Adidas, Chanel, the Chan Zuckerberg Initiative, The Rockefeller Foundation and the Visa Foundation. Working to eliminate the tired cliches, and simply the untrue myths that Black and Latinx talent doesn’t exist, Black Ambition plays a role in dismantling systems of oppression.

“We see a future where ideas flourish, ruinous risk is diminished, and Black & Latinx entrepreneurs are positioned to realize America’s promise. This is #BlackAmbition,” Williams said in a tweet.

Broad Street Ventures is the first athlete-founded fund to focus on providing people of color more control over their financial future. The fund (named for the street in Philadelphia, where Malcolm Jenkins played from 2014 until 2020) will look for opportunities to invest in Black and Brown businesses that lack access to capital or friends and family who can help them throughout the startup phase. It will focus on growth and late-stage technology and consumer products companies. The $10 million investment initiative funded entirely by Black and Brown investors includes a small group of fellow NFL players.

“My peers are the ones typically left out of the VC world,” Jenkins said to Forbes, “We are being very intentional to bring Black and Brown people in and make them aware of this opportunity.”

Putting capital into the hands of female founders

Black women have played a significant part in the massive growth in back businesses. In fact, Black women are launching startups faster than any other racial group in America. However, female founders of color represent less than one percent of the total venture capital dollars raised. Female celebrities are turning VCs to help change that reality.

Two innovative companies with female founders in the SV portfolio are tackling discrimination and inequity amongst minority women. Crystal Evuleocha is the founder of Kiira, an online platform focused on addressing women’s health inequities. Its AI-driven platform provides a compassionate and trustworthy voice in a field where Black women have been mainly ignored. Erin Carpenter, the founder and CEO of Nude Barre, seeks to make the fashion industry more inclusive, by making intimate apparel for all skin tones.

Serena writes, “Silicon Valley does not have a talent pipeline problem. It has a network selectivity and resource allocation problem…We can no longer stay oblivious to how our homogeneous networks influence who we fund and who we hire… we must extend the same thoughtfulness and consideration we give White male founders to all entrepreneurs” (CNN)

Musician, actress, entrepreneur, and now Rihanna can add VC to her impressive empire. In January 2021 Rihanna made her first investment (beyond personal investments) in Partake Foods, a Black own vegan cookie company. Backing the female founder and CEO, Denise Woodward, Rihanna led a $4.8 million Series A funding round. More than 50% of Partake Foods funding (a total $7.5 million) has come from Black investors such as Jay-Z’s VC fund, Grammy Award-winning singer HER, and Seattle Seahawks linebacker Bobby Wagner. But as Rihanna’s first investment, it’s significant she chose to back a female founder.

Artists and celebrities are partnering with high profile organizations and businesses to build networks to empower minority communities and support racial justice causes. Recently announced Alicia Keys partners with the NFL to launch a $1 Billion fund for Black-owned businesses. Their goal: to empower Black America through investment in Black businesses, institutions, and entrepreneurs.

There’s no doubt, Jay-Z has made some serious money with many smart investments. His latest investment is a $10 million fund to boost the number of minority-owned cannabis startups. The fund named “Social Equity Ventures is the result of the acquisition of two US-based pot firms — Left Coast Ventures and CMG Partners. His motivations for this venture? To boost Black participation in the industry. Across the US, minorities have been disproportionately punished or imprisoned for involvement in the drug; however, they make up only a small number of those making money from the billion-dollar industry. While a significant imbalance in the marijuana business remains, Jay-Z supports a more equitable playing field by diversifying the cannabis sector.

Jay-Z tells WSJ, “We were the ones most negatively affected by the war on drugs, and America has turned around and created a business from it that’s worth billions. I wanted to do something in a real, concrete way, where I do my part.”

Another artist, no stranger to entrepreneurship and big-time investing is Nas. His vision is to connect Black entrepreneurs with Black investors, and he’s doing just that through angel investing and his tech venture capital firm, Queensbridge. Nas has sizeable stakes in dozens of startups and has invested in rounds totalling $1.4 billion. He was one of Rap Genius’s first investors, and his firm has also invested in Walker & Company Brands, whose founder is Black entrepreneur, Tristan Walker, of Bevel Shaving.

Speaking with Fast Company Nas says, “One way that we can get more Black and minority tech entrepreneurs, is if we have more Black celebrities investing in Black entrepreneurs. Right now, only 1% of VC-backed startups are Black-owned. I think that if there were more people like you investing in the Walker & Companies and more minority-owned businesses, there would be more because it’s difficult getting funding.”

By no means is this an exhaustive list of all the Black and Brown celebrities who are investing in minority-led businesses and no doubt this year, even more celebs will announce their latest investment ventures. More investment and funds established for minority entrepreneurs will mean more game-changing capital to underserved founders of color.

Do We Need An Internet 'Bill of Rights'? - Techish Podcast