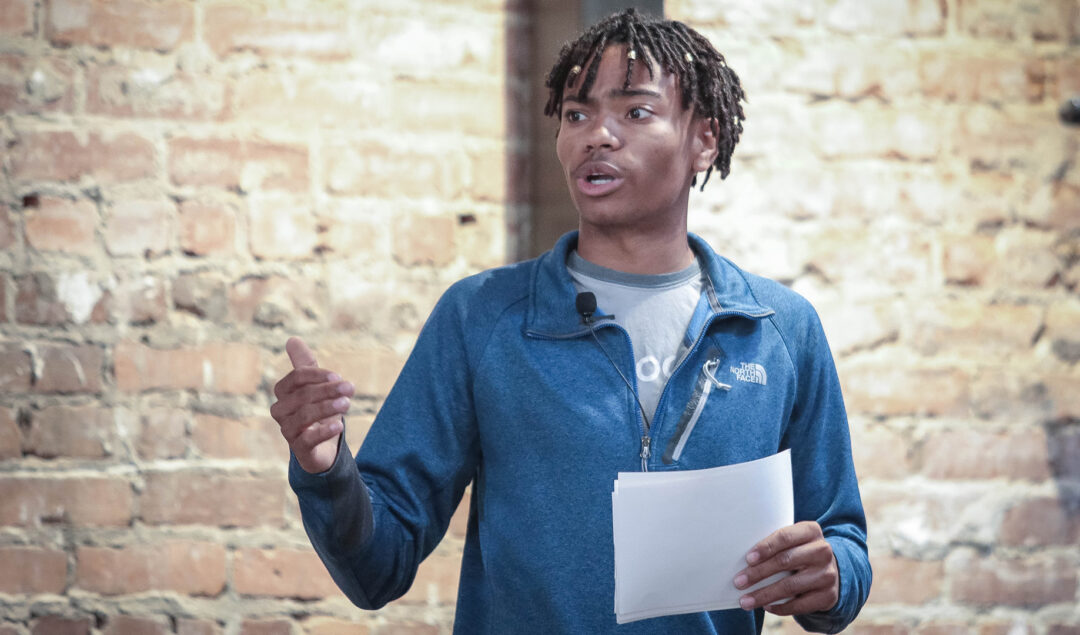 Hofstetter’s response to the racist abuse has taken social media by storm, with many commending the 22-year-old for his brave and teachable response to the disturbing racism he experienced during his studies.

So, here’s what happened.

On July 15, the university decided to host a formal dinner to celebrate the students’ success and mark the program’s end. Hofstetter and a few of his classmates decided to join, but no one could predict the events which followed shortly after.

A classmate had decided to AirDrop students an image of George Floyd, accompanied by the words “I hate ni**as.” The message, which left the entire room speechless had seemed to be a direct attack on Hofstetter, as he was the only Black person in the room at the time.

“I not only realized I was the only Black man in the room but also that no one was going to speak up. Someone wanted to hurt me,” Hofstetter explained in an interview with KTVU.

A few minutes of whispering and sniggering from his classmates went by before the Oakland-based student decided to stand up and address the bigoted situation.

After calling the room’s attention, he asked the class if anyone else had received the same message. Students confirmed that the student had shared the image with the entire class, so he instantly decided to alert his course director about what had just happened. They responded by gathering devices from all students to find the source.

Hofstetter decided a more proactive response would be best suited to find the culprit, so he decided to open up to the class about his skills in computer programming, which would make it easy for him to see the proprietor.

“Within 30 minutes, the student has the opportunity to come forward and take accountability,” he warned. “Otherwise, I’m going to get my laptop from my room, hack into the network and trace the image back to the device the student used.”

After thirty minutes passed, Hofstetter grabbed his laptop and hacked into the system within a few minutes.

“I found the student responsible very quickly. I take my work and threats very seriously, so there wasn’t a question of if I could do it. It was how fast can I find the person responsible.”

After finding the source behind the image, Hofstetter confronted the student. Despite this, the student remained unapologetic, so the Oakland native called the student to stand before the group and asked him what he knew about the killing of George Floyd.

Hofstetter decided to educate the student on how hurtful and toxic his actions were. He highlighted how significant the murder of George Floyd was and what it meant for Black people living in America. He shared his background growing up in Oakland and educated the group on his city’s involvement with the Black Panther movement in the 1960s.

“I explained his incredible lack of self-awareness and how he feels inherently superior to communities of color and how disgustingly dangerous that is,” Hoffstetter said.

“I ended the speech by encouraging others to learn how to fight racism in its many different forms and to take this experience as a moment of empowerment as I was.”

Hoffstetter’s speech’s impact on the students directly reflects what the Oakland-based tech entrepreneur is doing within the tech industry.

According to the outlet, GHTech works with young people to close the diversity gap in tech. Not only have they built various systems and networks to connect Black and Brown students across the US, but they also focus on empowering the next generation of BIPOC designers and developers, aiding them with the tools they need to succeed in the future.

“This covert attack has shown me how critical it is to continue fighting white supremacy perpetuated through technology and academia, not just in the United States, but across the world,” Hoffstetter said told The Oxford Blue.

“This was a physical manifestation of why I started using technology as a social justice superpower.”

In response to the incident, the college spokesperson from Hughes Hall released a statement.

“We have been made aware that a reportedly racist comment was shared among members of an external group which had hired college conferencing facilities. We understand the matter has been taken extremely seriously by the organizers and is currently being investigated. Hughes Hall condemns racism and racial harassment of any kind.”