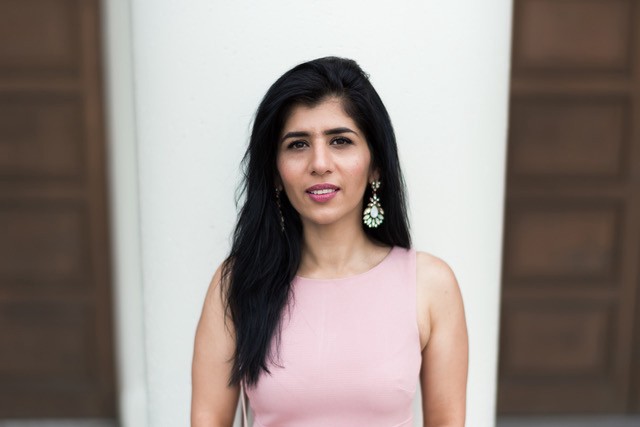 Sundas Khalid had never considered attending college, let alone a profession in engineering. As a young woman coming from a conservative family in Faisalabad, Pakistan, she says receiving an education and building a career was unheard of.

Shortly after finishing high school in Pakistan, Sundas got married and came to the United States in 2004 to live with her husband. After a six-year gap in her education, she decided to pick up where she left off and further her studies. Sundas attended a community college for two years before transferring to the University of Washington in Seattle in 2012. While earning her bachelor’s in business administration, she simultaneously raised her 4-year-old daughter and 2-year-old son.

During her time at UW, Sundas interned at Amazon as a financial analyst intern and worked with databases. She won first place for her presentation among all the interns and was offered a position. At Amazon, she recognized a newfound passion for technology.

“I never considered tech as an option because no one in my family or friend circle studied tech,” she says. “And it was a bit late, as I was three months away from graduation.”

In the last three months before graduation, Sundas took a database management certification course and began interviewing for Amazon’s technical and analytical positions. In 2014, she graduated from UW as valedictorian and gave a speech to an audience of 3,000 students, parents, and faculty at the Husky Stadium.

The path to success has not always been easy for Sundas, especially because she has been raising two children while building her career. In difficult times, she says she reminds herself of her husband’s support and stays inspired by those around her.

Sundas started attending the Grace Hopper Celebration in 2016 and has not missed a conference since. In 2017, she took part in the local Seattle chapter as a member of the speakers’ committee and was in the data science committee the following year. In 2019, she plans to be on the mentoring committee.

Through the AnitaB.org community, Sundas connected with the two co-founders of Pakistani Women in Computing (PWiC) in 2018 and now leads the PWiC Seattle Chapter.

“To overcome imposter syndrome, I’ve started surrounding myself with women who look like me and pursue similar career paths,” Sundas says. “[I have been] mentoring young women who are entering tech and helping them shape their future.”

Sundas currently works as a data scientist in Amazon’s A/B testing platform and Weblab, the centralized science team for testing and launching new features for the Amazon site worldwide. She has given over 20 presentations and has worked with several Amazon teams, including Alexa, Amazon Music, Search (A9), Amazon Devices, Amazon Kindle and Prime Now.

In November 2018, Sundas won two awards for exemplary work at Amazon with her non-Prime experience (NPX) team. After five years at Amazon, she says that she has taught herself data engineering, statistics, machine learning, SQL, R and Python with the help of courses and the people around her.

“If you have a dream, make sure you have the right people around you,” Sundas says. “It’s about who you involve in your life and surrounding yourself with people who believe in your dreams.”