By Abbianca Makoni January 21, 2022 in Break into Tech, Main No Comments 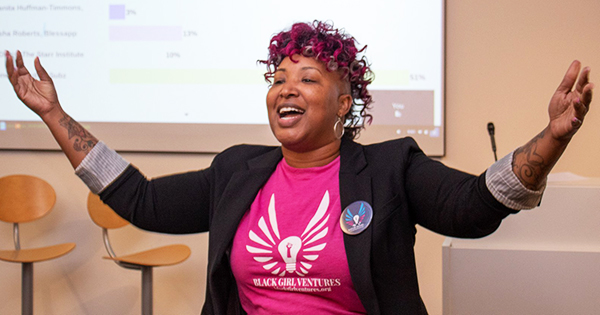 Black Girl Ventures is mapping out its plans for the year, including a new startup accelerator program, to help elevate more female founders of color.

The DC nonprofit, which supports and drives funding to early-stage companies led by Black and brown women, is accepting applications for three efforts targeting female entrepreneurs.

The program aims to “change the playing field for Black and Brown women-identifying founders while closing the generational wealth gap, strengthening families, and creating a more equitable society,” the website reads.

Those chosen will receive a $5,000 stipend, business resources, development training, a lifetime membership to the Black Girl Ventures Connect platform, and more.

The application is open to Black or brown full-time HBCU students of all or no genders between 18 and 24. Applicants should also have a business plan or idea and commit to approximately three hours per week for eight weeks.

At the end of the eight weeks, participants will showcase their personal and business growth, and seven of the women will compete in BGV’s upcoming pitch competition, where entrepreneurs will have the opportunity to pitch to funders.

The deadline to submit your application is February 4, 2022. Selected candidates will be notified by February 16.

What impact has BGV already made?

Since founding Black Girl Ventures in 2016, its founder  Shelly Omilâdè Bell has traveled the US, and beyond to speak about Black entrepreneurship, fundraising, venture capital, and the disparities Black women face in building their businesses.

The platform has created a community for Black women to find the support they need and has funded over 270 women whose businesses have a collective $10 million in revenue and support 3,000 jobs. BGV has chapters in over 12 cities and partnerships with Nike, Visa, and Experian.

Who is Shelly Omilâdè Bell

She currently employs 11 people and is a mother.

She then created a Meetup.com group, and within a couple of weeks, the membership went from 0 to 150 and kept climbing. She then launched the first event called “Eat, Pitch, Vote” with the simple idea to bring women of color together to discuss entrepreneurship, partnership, and support through collective economics.

This event eventually grew to what Black Girl Venture is now, a platform for women from Black and Brown communities to come together, get mentorship, funding and guidance.

The Tech Founders Connecting Black, Latinx, And Indigenous Talent to Remote Work Through Their Startups