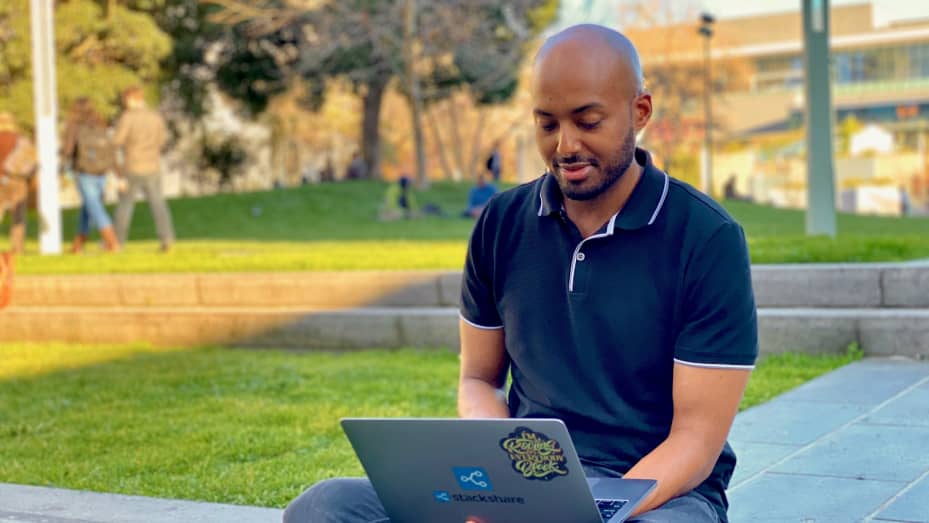 Yonas Beshawred, the CEO of StackShare and countless other ventures, is a man not afraid to tell it as it is and this skill has worked in his favor.

His venture, StackShare, a platform that allows software developers and tech companies to share their tools and how they use them, has gone from strength to strength since its launch in 2014.

What first started as a side project on a WordPress blog, StackShare has raised $7 million and reached 1M developers, engineers, CTOs, VPEs, architects, and founders. Although the journey hasn’t been easy – he says he wouldn’t change a thing.

Besides the work at StackShare – the 34-year-old also helped start an organization called Harambeans, a network of over 250 African founders who have collectively created over 3,000 jobs and raised above $400 million in total for their companies, he says.

If that wasn’t enough – he also helped launch Ethiopians in Tech and a new organization called the Ethiopia COVID-19 Response Team (ECRT), a platform for professionals from all over the world to collaborate responses to Covid-19 in Ethiopia.

The team at POCIT sat down with the founder to hear a bit more about his journey.

Yonas: I was working at Accenture, right out of undergrad. So I studied business and I think I was always interested in business and in international development, but not necessarily tech.

I went and worked at Accenture for a little bit, about 18 months and I saw how these really large companies made IT decisions and large scale technology decisions. I worked in the IT strategy group and we’d go in and help big companies figure out a new data center and the different components to that.

And yeah that was one thing that eventually inspired StackShare and then I actually read this book called Founders at work by Jessica Livingston and I was just really inspired by what I read and after that book, I decided I had to get into software.

So I started studying human-computer interaction at the University of Maryland, just to get deeper into software.

POCIT: And then ofcourse from then on you went to launch and eventually scale StackShare. But before you got to this point – what would you say were some of the challenges you experienced especially as a sole founder.

Yonas: There were all sorts of challenges in the beginning. It’s tough to name just a few” I think like anyone that goes on this startup journey and ends up doing it for a while, you basically have every sort of challenge you can think of.

But when it comes to challenges for me – in the early stages, it was kind of like what everyone I think experiences, which is usually the team and money issues. I didn’t even have a team.

POCIT: Speaking of teams – I guess it can be quite hard being a sole founder looking for someone who is willing to help you make your company a success and take it on asif it were their own?

Yonas: And I think that’s definitely a piece of the StackShares that’s pretty important – I never had a co-founder. But I think the way that I’ve generally dealt with that is by just surrounding myself with people that are better at these things than I am. But [when we are hiring or looking for a team] we generally look for people that have that startup mentality.

There’s a lot of qualities that come with that, but I think one of the most important is just a bias towards action – getting things done is the name of the game, its execution.

This trait really makes for good teammates at the early stages, making sure that you’re bringing people in that get things done, and are self-motivated to get those things done.

POCIT: Did you ever have any challenges or hires that weren’t so great in the early stages?

Yonas: We’ve definitely made some mistakes from a hiring perspective and we’ve had to deal with that over the years, but we’ve gotten better at it. One of the things that I think has changed that a bit is leaning towards people that really want to be at a startup and either have had some sort of experience before or are really passionate about getting that.

POCIT: Okay, so we’re in 2021 and StackShare has a number of achievements under its belt including the fact that you’ve just hit 1M developers who’ve joined your community – how does that feel?

I think its just an amazing milestone for a few reasons. One is that you can count on one hand the number of developer communities on the entire internet that has scaled to a million members, there’s really just a handful. There’s Stack Overflow, there’s GitHub, and then, you know, you could probably fill in the blank with maybe a couple of others.

But really, those are the major two platforms – then there’s obviously a big developer community on Reddit. There’s only so many developer communities that have reached this scale. So it’s an important milestone from that perspective.

And so now, we rarely talk to a customer, like an enterprise customer, that doesn’t have engineers that are already on StackShare or who have never heard of it and so that a great feeling to know that we’ve become sort of a household name for developers.

POCIT: You should be proud! Okay now a really important question – how do you find balance?

So I think with balance, you just try to have it as much as possible and so for me it’s translated into making sure that I take time away from my computer every week whether that’s an afternoon or even a whole day. I just try to make sure I spend time away from my computer, and that’s a big thing. But I think you really have to be intentional about it.

But, you know, I think that anyone that is doing a startup – you will be challenged to really find a true balance. But I don’t think there’s one definition of balance either, you know, my concept of balance might be different from yours, and, and vice versa.