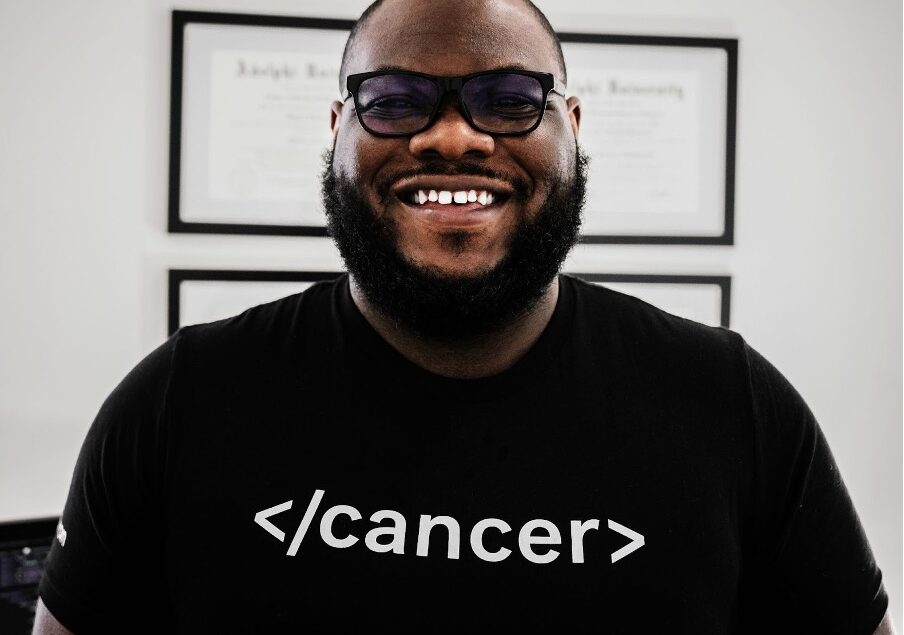 Changing careers is never easy. When Richard Chounoune left a six-figure income to pursue a career in tech as a software engineer, he initially had a hard time adjusting to his new industry.

Today, Richard works at Flatiron Health, a healthtech company, as a recently promoted software engineer. Here he shares his experiences as a young immigrant from Haiti who felt stuck at a dead-end job and mustered the courage to pursue a passion for programming.

From Selling Cars to Software Development

Richard arrived in the United States from Haiti, alone, as a student, in 2006. Four years later he left when his student visa expired, but he and his parents returned in 2013.

He describes coming to the US as a dream for his family but with it came many responsibilities: “I had to take care of my family. I needed to find a job. This was a hard time because I didn’t have any experience.”

He applied for jobs and took the first offer presented to him, as a car salesman — and thrived. “Within a few months, I became a top salesperson earning six figures a year.”

His working schedule, however, was gruesome. “I had no work-life balance. There were months where I had to work 30 days straight.” He stuck it out for four years due to the good compensation and also got married during that time. “I got a little complacent.”

Then on his 30th birthday in 2017, he realized that he was miserable. “I was sitting in my car outside work. I didn’t want to work there anymore. It was so impromptu that I didn’t even have time to talk to my wife about it. So I called and told her, ‘I’m going to walk in and quit.’”

He doesn’t regret his decision. “I didn’t see myself having a whole career in sales. I wanted to do something I was passionate about.”

Richard applied to almost 300 positions within two months. He realized that he needed to upskill to change careers, so he completed Google’s IT Support Professional Certificate. He accepted a  position as an IT support professional, but wasn’t happy. “My salary got cut in half and I wasn’t getting the responsibilities I wanted to have. But I still had a vision of where I wanted to be.”

Nonetheless, this time allowed for self-introspection. He examined his skills and interests to better understand his capabilities. This wasn’t the first time Richard changed tack. In college, he was initially pre-med but realized a career in medicine wasn’t for him.

“Most Caribbean parents want their kids to be doctors,” he explained. “At that time, I stopped caring about pleasing my parents, so I began to pursue what I wanted to do.” He became interested in a relatively new program about healthcare informatics. “I was part of the third batch of students. It was a mix of healthcare and IT, both things that I liked. So, I just went for it and graduated with a degree in that field.”

Years later, during his career change, he found another aspect of the tech industry that fascinated him: coding. “I didn’t even know what it was at that time. I learned about Python and it all clicked. I had my eureka moment. Coding is what I want to do. I enjoy coding. And that’s what I see myself doing for a long time.”

The Journey to Flatiron Health

At a glance, Richard’s skills were perfect for a company like Flatiron Health. There was only one thing: first employed as an IT support engineer for Flatiron, most of his coding skills came from watching video tutorials on YouTube and learning online. He wanted the structure provided by a formal class and a certificate showing the fruits of his labor.

“I am a little self-conscious of the fact that I don’t have a traditional computer science background, and I’m a new engineer. I have to work additional hours just to prove myself and get rid of that feeling, which is kind of like the imposter syndrome.”

When he became aware of the opportunities at Flatiron, he decided to enroll in a boot camp to further his programming skills. His colleagues were supportive of his decision to apply for a promotion, and a mentor also helped him through the whole process. “Everyone made sure I had what I needed.”

The path to becoming a software engineer at Flatiron wasn’t straightforward. “There was a risk. While I was applying for this new position internally, my previous role could have been backfilled. Thankfully, after 15 weeks of hard work and dedication, I was offered a full-time position this past February, so I’m now a software engineer.”

In the span of less than five years, Richard went from working a job that he didn’t enjoy to finally landing the programming position of his dreams. “If you do good work at Flatiron Health, you’ll be recognized for it.”

The Path to Career Happiness

Richard took some life lessons from working in a well-paying job that he didn’t like. “Once you find what you are interested in, it’s pretty much just a matter of laying down the path and the road to get there.”

He encourages people to take full advantage of online resources and emphasizes the value of networking and having a mentor. “I didn’t really understand the importance and value of mentorship until someone decided to mentor me throughout the process. Now I’m mentoring a new apprentice who started a few months ago and guiding them through the ropes. And I tell them, ‘if you’re here, you’ve already proven yourself to be capable. Yeah, so don’t cut yourself short.’”