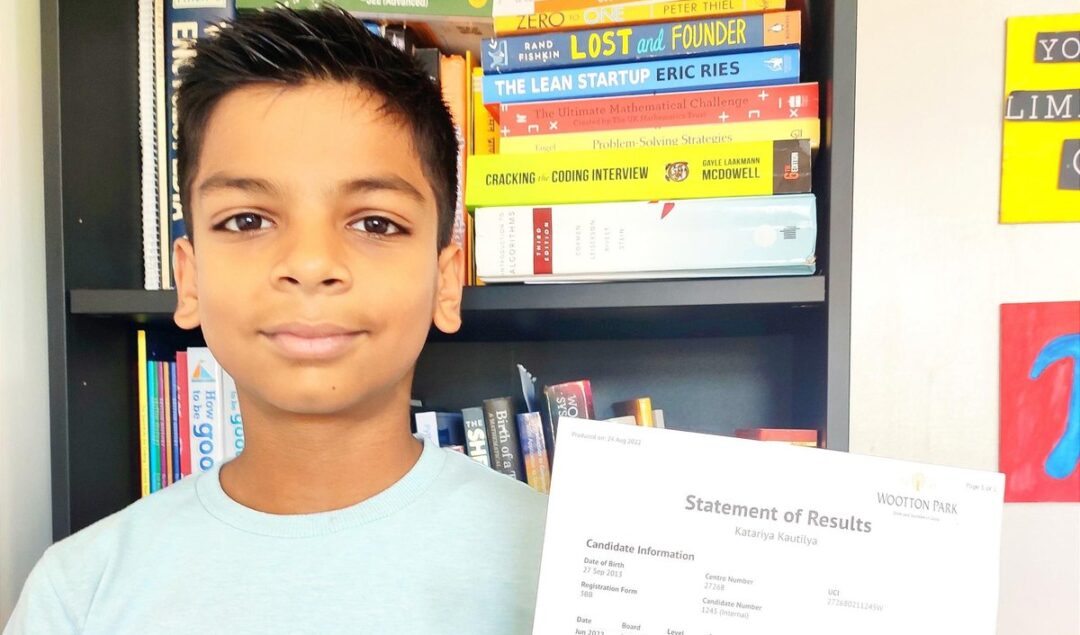 Two years ago, Kautilya Katariya broke records by becoming the world’s youngest qualified computer programmer. Now the eight-year-old has added another accomplishment to his growing list, after achieving the highest grade possible on his national math exam.

The General Certificate of Secondary Education (GCSE) exam is the main qualification taken by 14- to 16-year-olds across the UK. However, after teachers at Wootton Park School in the UK assessed his ability in the subject, Kautilya was allowed to study for and sit the exam almost eight years early.

Kautilya achieved a 9 – the equivalent to an A+ or A* grade.

The news comes just two years after Kautilya reached yet another milestone.

Back when he was just six years old, Kautilya had become the world’s youngest qualified computer programer after earning the Guinness World Record for completing IBM’s AI certification. The feat was accomplished through self-taught studies using free resources online to learn how to program.

“Me and his mother are really proud of him and the amazing work he is doing. It was great to see him feel so accomplished,” his father Ishwari Katariya said, according to Metro.co.uk.

“I’m feeling good about my achievements and I’m quite proud. I got interested when my dad gave me a book about programming and I liked it so much I finished it in a day. That was when I was five-and-a-half,” Kautilya said, the outlet also reports.

Initially, Kautilya explored computing languages like Python, JavaScript, and supporting HTML, but zeroed in on Python because he found out that Python is the best programming language to learn right now for AI and machine learning, Ishwari Katariya said. It took him around six to seven months to master Python.

Kautilya received five certifications in Python and AI from IBM in November 2020. He completed IBM’s Foundations of AI professional certification on edX and the Python for Data Science course from IBM Cognitive Class.